All the World’s Borders

This is one of those projects I thought would be a quick and easy way to play with the sf package and ended up being a hellish slog through Photoshop.

My vague starting notion was to extract all international borders and arrange them in some visually pleasing way.

I started by testing my ideas out on US state borders, as that seemed like a smaller challenge. And indeed, extracting all internal boundaries of the US did turn out to be remarkably easy.

Arranging them, however was not. About 5 hours of manual work later, I ended up with this (click for big):

For some reason, arranging state borders in a spiral for most of a Saturday didn’t kill my enthusiasm for this project.

I decided to tackle international borders, but ran into lots of problems with that idea.

Secondly, most data sources available aren’t of a high enough resolution to capture all the super-tiny borders out there. I did download all of OpenStreetMap’s country border shapefiles, but those turned out to be much too complex for my computer to handle.

Thirdly, getting border lengths for the entire world is a bit beyond my current skill level. Getting outputs isn’t the trouble–the trouble is the world is round, maps are not, and figuring out the right projections to get the right lengths to pop out at the end is… eh… not for me.

Ultimately, I threw my hands up in the air and produced a simple world map that labels each border by (approximate) length.

Now that I look at this with fresher eyes, I regret changing the font size for the border lengths; it’d look cleaner if all of them were the same size. However, I am NOT going back to change that, so I’ll file that away for as a lesson learned for the next time I decide to manually label 300-some borders (hopefully never.) 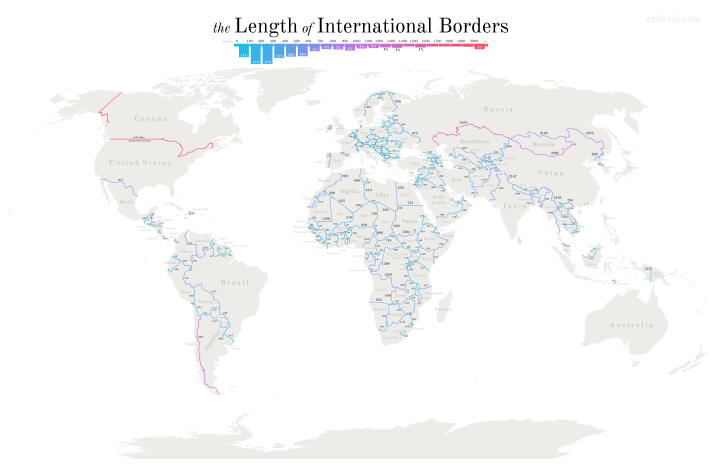