Are Great British Bake Off Technical Challenges getting harder?

If in the unlikely event you’ve never heard of the Great British Bake Off, let me enlighten you: it’s a TV show where British people bake things in a tent. It’s not quite as relaxing as it sounds: contestants are asked to bake some very complicated things under extremely stressful conditions.

One challenge of the three presented every episode is particularly feared: the Technical. The bakers are given a week to practice for the other two challenges. In the Technical Challenge, though, they’re surprised with a recipe and must attempt it with zero preparation.

Since every baker works from the same recipe in the Technical, and because these recipes are readily available online, it’s the ideal candidate to investigate claims that the Bake Off is getting much harder over time:

What makes a recipe difficult?

How can we tell if one Technical Challenge is more difficult than another? I polled baking family and friends to see what they thought, and answers fell into two main groups: familiarity with the item being made and overall complexity of the recipe.

Obviously, making a recipe a second or third time is usually easier than doing it the first. Even just having an idea of what the end product should look like gives you a big leg up. Contestants frequently express relief that they’ve even heard of  the items they’ve been asked to bake.

As a proxy for the nebulous concept of recipe familiarity, I looked up “challenge item” + recipe on Google Books to find how many cookbooks are out there with that item in them. In theory, if lots of cookbooks have a recipe for the item, the people are likely to be familiar with it.

It is cyclical, but there’s a very notable downward trend in recipe familiarity over the 9 Bake Off seasons. In season 1, folks were making scones and focaccia. In season 9, they made aebleskiver and blancmange.

Measuring recipe complexity is, well, complex. I decided to look at just a couple of key areas I personally considered important.

A component in a recipe is a sub-item of the whole that requires its own set of instructions. For example, a pie may have two components: the crust and the filling. I find it safe to assume that the more components a recipe has the more of a pain in the ass it is to make.

The number of recipe components has risen over time, and jumped especially in season 9:

The number of unique ingredients also adds to recipe complexity. If you have to gather a wide variety of objects, the recipe might be more harder to make.

This has risen over time, but did undergo a three-year lull during seasons 6 through 8.

A longer recipe is seems likely to be a harder recipe. I decided to measure length by the number of sentences in the recipe, rather than individual words, with the theory that most sentences contain an action for the baker to take.

By this measure, recipe length cratered in season 7, but rose both before and after that point.

I doubt the Bake Off contestants have to do their own dishes, but we home bakers do. For each recipe, I counted up the number of dirty pots, pans, and bowls generated (forks, spoons, and other stirring implements I ignored).

We can clearly see the technical challenges require more and more dishes over the seasons. 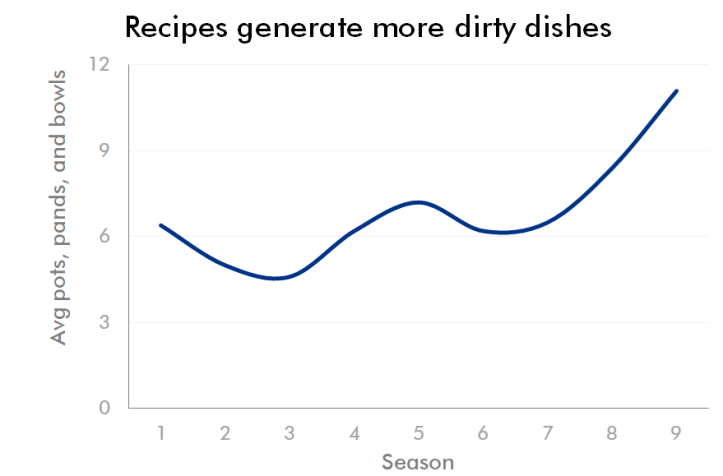 With the 5 aspects of recipe difficulty established (familiarity, components, ingredients, length, and dishes to do), we can roll them up into one overarching difficulty score. I created an incredibly sophisticated, ultra-proprietary formula to do this*.

This formula conclusively shows that the technical challenge has increased in difficulty over time. They eased off a bit in season 7 after the insanity of season 6, but it’s been going steadily up since then.

A graph of the difficulty score of each challenge shows how variable they can be. However, it’s clearly obvious that the challenges in later seasons are much more difficult in than those at the beginning: the hardest challenge of season 1 (cob loaf) is easier than every challenge in season 9 but one (naan)!

Contestants sometimes groan when the hosts announce the upcoming Technical was chosen by judge Paul Hollywood. The thinking is his recipes are much harder than those of his co-judges, Mary Berry and Prue Leith.

However, ✨with data✨ I can actually show their fears are misplaced! In truth, Paul is a big ol’ softie. Prue, however, is an absolute demon and contestants should be terrified of any challenge she sets. With one exception, all her recipes are above the average difficulty. 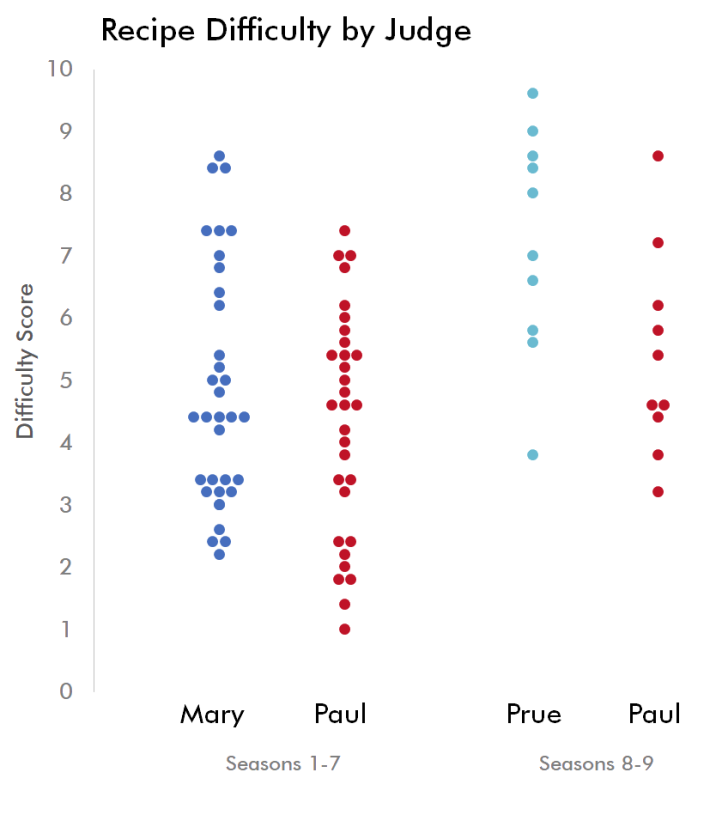 My metrics for difficulty don’t necessarily capture the full picture. For example, most bread recipes were rated as easy because they’re familiar and contain only a few ingredients, but knowing how knead and proof dough is a fine skill. However, they do let us draw a broad conclusion: almost certainly, the bakers of season 9 are busting their butts on a different level than the bakers of season 1.

All data for this project can be found here.